BREAKING: Nigerian Man Who Couldn’t Feed Sets Self On…

BREAKING: Nigerian Workers Locked Up In Another Chinese… 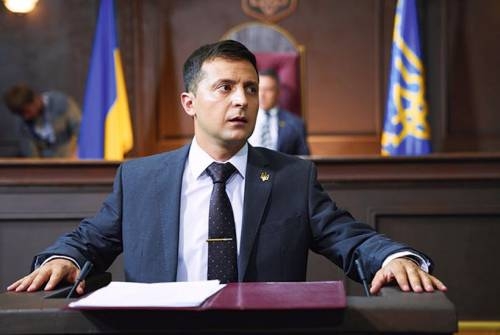 SAHARANEWS – Volododymyr Zelensky, Ukranian comic actor and showman, has defeated Petro Poroshenko, the incumbent President, in an election in Ukraine on Sunday.

Zelensky, a 41-year-old comedian whose announcement of his ambition to run for the nation’s highest office on the New Year’s Eve was initially dismissed as a joke, beat the incumbent 53-year-oldPoronshenko in what analysts have described as a “crushing defeat”.

The comic shunned traditional campaign rallies and instead performed comedy gigs and used social media to appeal to voters.

Before now, Zelensky’s only previous political role was playing the President on television, but he trounced incumbent Poroshenko by taking 73 percent of the vote, according to exit polls conducted by several think tanks.

Poroshenko lost to the television star across all regions of the country, including in the west where he traditionally enjoyed strong support.

The 41-year-old star of TV series ‘Servant of the People’ will now take the helm of a country of 45 million people beset by challenges.

Earlier on Sunday, Poroshenko had warned Ukrainians against taking a chance on Zelensky “because this is not funny”.

“Well, at first it can be a bit funny and then it might hurt afterwards,” he said after casting his ballot.