Biafra: IPOB tells members what to do ahead of Nnamdi…

Keeping Our Dead Over 3 Days Before Burial Must Stop,…

JUST IN: Go To Court If You Want Restructuring – Osinbajo To Ohanaeze 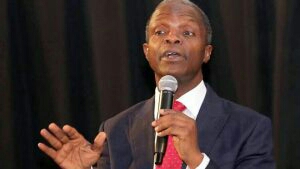 Vice President Yemi Osinbajo has urged Nigerians who are agitating for change in the nation’s system of government to approach a competent court of law, if truly they want the restructuring of the country.

Osinbajo disclosed this on Wednesday in Ibadan, Oyo state at the 80th birthday celebration of a former governor of Osun state, Chief Bisi Akande.

Speaking on the theme: “Nigeria: Achieving National Unity Through Peaceful Restructuring,” Prof. Osinbajo faulted the presidential candidate of the People Democratic Party (PDP), Atiku Abubakar, who is promising to restructure Nigeria if elected.

The Vice President claimed that Atiku and the then government of PDP vehemently opposed restructuring when the former governor of Lagos state, Asiwaju Bola Tinubu introduced it in 1999.

Also speaking, Kaduna state governor, Malam Nasiru El-Rufai who was the keynote speaker, said the recommendation of the APC committee on restructuring was the best for the country.

“APC Committee on True Federalism submitted its report last year. Before I conclude this address, it is important to remind us of the major recommendations.

“The committee recommended that the federation be re-balanced, with more powers and responsibilities devolved to the states.

ALSO READ:  IMPOSTOR: This is what you get from an irresponsible government - Senator Shehu Sani

“The committee also clarified that the federation is a relationship solely between the states and the Federal Government, and that each state should be allowed to operate the system of local government that best suits it.

“In our diverse nation, it is only prudent to concede that one size or structure of local governance does not fit all. Successful restructuring depends also on our national resolve to protect the idea of a common citizenship.

“The rights guaranteed under the Constitution should be enjoyed by every citizen, no matter where they reside, and no matter which part of the country they hail from. A restructuring of mentality and values is a key factor in the success of a restructuring of the governance and political structure,” El-Rufai said.

ALSO READ:  BREAKING: ‘You Will Suffer’ —Wike Blasts Southern Govs For Betraying Him For Atiku