JUST IN: When A Lost Touch With Realities, He Talks Like Nnia Nwodo – Prof Ohagi Replies Ohanaeze 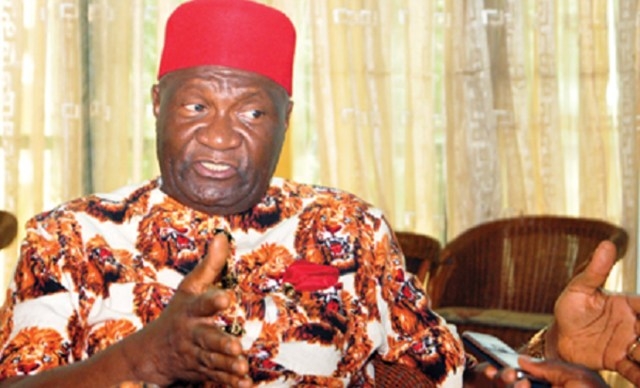 The first time I took pen and paper to reply to someone’s public outburst via a letter was sometime in 2017. Nnamdi Kanu was suspected to have been killed by the battalion of soldiers sent by President Muhammadu Buhari to his hometown at Afaraukwu Ibeku in Umuahia, Abia state. An attack that resulted to the killing of more than 100 Biafran youths. In that letter, I exposed a mocking letter masqueraded as praise for a hero, written by former aid to Goodluck Jonathan, Mr Doyin Okupe. Today, I am doing the same to you, Mazi Nnia Nwodo, the President General of Ohaneze Ndigbo.

Sir, I read your emotional outburst to Ndi Igbo. I must confess, it was a very wonderful article written to draw sympathy to yourself. It was really emotional. You wrote from the dept of your heart x-raying your achievements and all you have ever done for Ndi Igbo and IPOB. Meanwhile, at the same time, you systematically demonized Mazi Nnamdi Kanu and made attempt to demarket him. In that letter, in a desperate attempt to draw sympathy to yourself, you expressly called Nnamdi Kanu a liar, and made it look like the problem is merely between you and Nnamdi Kanu. But it is not, and you know vividly that it is not. Ndi Igbo si na Okenye anaghi a nọ n’ụlọ, ewu amụọ n’ogbu(a goat does not give birth with a rope tied to it’s neck where an elder or elderly people abound). The problem is not between you and the IPOB leader. The problem is you the leaders against the generality of Ndi Igbo. You lots see governance as a tool of subjugation. Aiding the Fulani masters in a complete enslavement of all of us.

Sir, I really don’t think you and your few supporters understand what Ndi Igbo expect from you people as the leaders which you all claim to be. Not at all. Reading your letter showed your brazen ignorance as regards to what Ndi Igbo really want and crave for. I as a person don’t see any personal problem between you and Nnamdi Kanu, and neither is it a supremacy war as some people might want to believe. I as an ordinary young man can tell you the truth. But before I continue, I will like to point out some points you made in your letter.

In your letter, you stated that:
“The IPOB leader first of all accuses me(you) of being an accomplice to the invasion of his homestead in Umuahia by the Nigerian Army in Operation Python Dance.

“He holds me(you) and our South East Governors and Legislators responsible for the marginalization of the South East. He accuses me(you) of being against the realization of Biafra and a saboteur to the Igbo cause.”

Like I said earlier, you leaders of South East are completely ignorant of what Ndi Igbo truly want. It is not Nnamdi Kanu that is accusing you leaders of being an accomplice to the invasion of his homestead in Umuahia and killing of unarmed IPOB members by the Nigerian Army via Operation Python Dance. It is Ndi Igbo that accused and are still accusing you people. Sir, you claim to be the President General of Ohaneze. By that status, you are a respected voice in Igbo land, yet you looked on while Nigeria president sent soldiers against peaceful protesters. You tried exonerating yourself, yet you are the one that proclaimed how you are going to sabotage every move for the restoration of Biafra. From the start, you saw a call for referendum as a call for war. You saw whatever IPOB is doing as people trying to cause war in Nigeria.

So tell us how people you completely kept quiet as they were killed won’t accuse you of complicity in their massacre? Is it not a way of sabotaging the call for Biafra? Do you actually know what a press conference from you during that genocide against youths that committed no offence could have achieved? You rather claimed to have written to United Nations. Tell that to the gods Sir. When actually did you write to UN? During or after the massacre? What glued your tongue to your mouth during that genocide by Nigeria soldiers? You and Governors of South East must learn how to take responsibility for your actions. There is serious complicity in silence. You all supported the actions of the Nigeria government through your silence and passive attitude as your youths were mowed down by the Northern barbarians.

Sir, do you know that we know the tight situation you leaders of the South East are in Nigeria? We know how crippled an Igbo leader is in Nigeria environment. The system have made it impossible for an Igbo leader to stand with his people. It made cowards of you all. It is either one betrays his people or he is dethroned for a willing tool to takeover. So when you talk about not being a willing tool, I laugh so hard and ask if you really know what being a stooge is. Sir, your loud silence as soldiers were butchering people in Abia and Anambra during that ‘oppression’ Python dance is a sign of you being a Fulani stooge. When you openly proclaimed that you will sabotage every move for the actualization of Biafra also portrayed you as an unrepentant stooge. In a time Fulani herdsmen are killing and Boko Haram maiming people, you are there speaking on how you will sabotage your own people. Tell me what that makes of you? A hero to Ndi Igbo or Fulani people?

Sir it pains me when you call people liars, yet right inside the letter you wrote, you also told a lie. In your letter to Ndi Igbo, you stated that it was the Federal Government Of Nigeria that proscribed IPOB. Sir, this is a blatant lie. Now is it an act of disrespect to tell an elder that he lied? We all know too well that it was South East Governors that rose from a meeting in Enugu immediately after their people were massacred in scores in Umuahia and proscribed IPOB. You know this, yet you tried misleading the people. News of what happened are still in the internet and we all can still search for it as to know exactly who and who proscribed IPOB.

While South East governors got IPOB proscribed, Fulani herdsmen who are roaming freely in Igbo land are still killing people. Just weeks after they murdered a Catholic priest in Enugwu, they also killed a pregnant woman in Enugwu. We didn’t see the governors of South East proscribe them. They are still free. Tell me what people like you would have done if it were to be IPOB that killed a Reverend Father and a pregnant woman. South East governors would have converged and declare a shoot at sight on every IPOB member. You leaders are always strong when Ndi Igbo are involved. Just a little treatment Senator Ike Ekweremadu received in Germany, it has made our governors threaten to bring Nnamdi Kanu back, disgrace and humiliate him. That’s same governors whom Fulani herdsmen have been killing their people. I am completely disappointed at leaders like you people.

It is quite unfortunate that you still accuse IPOB members of bombing your house. It is quite unfortunate really. You mean you have evidence of IPOB members bombing your house and you forgave them? You mean Nigeria police caught IPOB members that bombed your house and let them go scot free, simply because you forgave them, yet people caught by Nigeria police during peaceful rally are still in Nigeria prison. Sir, why on earth do you leaders think we all are dumb and stupid? Why? From my own understanding, I haven’t seen IPOB in any act of violence, not to talk of bombing a house. A peaceful group like IPOB can never try bombing your house and a tactical group like IPOB who stand on non violent agitation won’t degenerate so low to such a level. This undoubtedly is another of your perfect lies Sir.

Sir, we the people are not asking you to start calling Nigeria zoo or fight for Biafra with IPOB. We are asking that you all stop insulting our sensibilities, by your eternal slavery to the Fulani. We are asking you people to stand on what the people want. It is a known fact that Ndi Igbo are suffering great marginalization in Nigeria. The only international airport Ndi Igbo have has been shut down completely. Flying out of Enugwu international airport is more expensive than doing same from Kaduna, Lagos or Abuja international airports, yet we are One Nigeria. Igbo land is currently militarized and police checkpoints are everywhere, and they harass, extort money and kill Ndi Igbo at the slightest provocation, yet you leaders are silent.

Believe me Sir, this is not Nnamdi Kanu against you. This is Ndi Igbo against all of you. Ndi Igbo are now divided and the division is between the selfish leaders, their payroll supporters and the rest of us. We have suffered humiliation. And we are saying enough is enough.
We saw litanies of your achievements and your father’s achievements in your letter. We saw that just like your father was a beneficiary in the rot called Nigeria, so you are a beneficiary too. But we are made of men Nigeria have not only disappointed, but enslaved and imprisoned. Lots of us lost opportunities because of a hopeless nation like Nigeria. And as far as am concerned, Nigeria is a terrorist state.

Your Nigeria have protected Fulani herdsmen, recruited Boko Haram terrorists into the Nigeria military, while peaceful protesters are continuously gunned down and imprisoned without trial. Many times, people have been kidnapped right inside their house without trace by the Nigeria security. We all are here when bodies of more than 50youths were found at Ezu River in Anambra state. A lot has happened to us in Nigeria. Yet you all claim ignorant of every thing.

Sir, those destined to be fooled uncountable times can fall for that your blackmail of a letter, but not people like us. Until you people change your ways, we will never respect leaders who betray their own people. Igbo si na asọkata eze anya, ekpuru nkata gwa ya okwu(There is an extent a brutal and tyrannical king would reach, his subjects would be forced to masquerade their face with a basket and confront him).

I rest my case.