CORONAVIRUS: Black Friday In Italy As Over 626 Dies Within…

Simon Ekpa’s Passion for Biafra is Beyond Measure…

“Now That The Army Has Failed In The Fight With Boko Haram, Deploy Women To Do The Job” – Aisha Buhari Urges FG 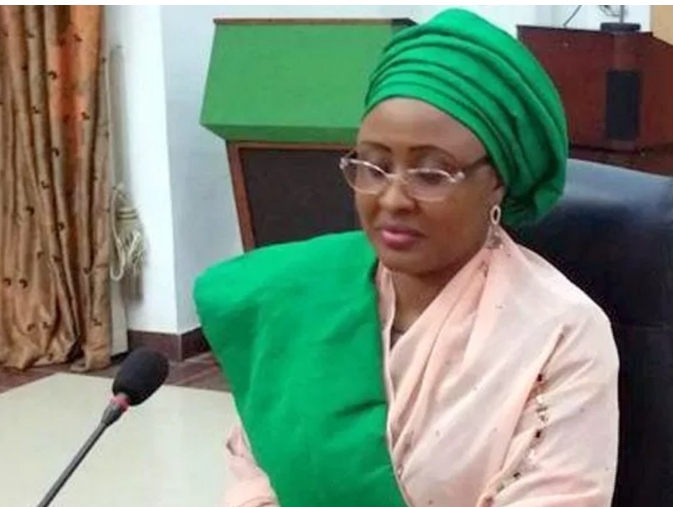 SAHARANEWS – The wife of the president, Mrs Aisha Buhari on Thursday charged authorities of the Nigerian Armed Forces to utilise the potentials of women in the military in their operations to address the nation’s security challenges.

She said insecurity in the country was still the way it was because the armed forces was yet to redefine the role of women and explore their potential for operational effectiveness.

Mrs Buhari, said injecting women in the theatre of operations had become necessary rather than restricting them to catering, finance, human resource, personnel, logistics and other support arms.

She noted that the insurgency war and other security operations embarked by the military in the country would have yielded better result if it had explored the potentials of women whom she said have patience, perseverance and passionate about their assigned tasks.

The wife of the president gave the charge at the opening of the Defence Headquarters maiden annual conference on women peace and security at the National Defence College, Abuja.

The one-day conference had as its theme “The imperative of gender mainstreaming in the Armed Forces for operational effectiveness.”

Represented by Dr Hajol Sani at the occasion, Mrs Buhari, said: “The security issues bedeviling our country still abound probably because we are yet to redefine the Armed Forces of Nigeria to explore the potential of women for operational effectiveness. Women possess the traits of patience, perseverance, and passion.

“There is a need for the reformulation of laws and policies that border on the inclusion of women in the strategic reformation of effective operational deployment.

“The wide margin and lack of flexibility in structures based on gender should be abridged.

“Let me at this outset state that I and a good number of Nigerian women regard ourselves as soldiers; this is because we are the protectors of the family and the home; these are our frontier and territories.”

She also said: “Nigeria – Africa as a continent is a male-dominated environment and so are the armed forces. Because of this chivalric dominance, the military is often hostile to women.

“Women do not adapt to the armed forces as easily as men die to their genetic make-up. Although this varies on individual basis, specific factors which include rejection, isolation and unhealthy attitudes from mainly the men. These factors are especially pronounced within the operational combatant sectors of the armed forces.

“These factors manifest in a number of ways including sexiest jokes and remarks as well as women not being taken seriously in operations. Gender stereotype against women is a potential threat to women’s advancement in the military.

“There are a good number of reported cases where women are prevented from participating in combat duties excluding pregnancy or maternity.

“In many careers as housewives or in the military, women have been recorded to put in more effort in a bid to establish their equality.”

To this end, she called for training and developmental opportunities specifically designed to support female personnel.

In his address on the occasion, the Chief of Defence Staff (CDS)  General Gabriel Olonisakin, said the Nigerian Armed Forces has implemented various initiatives and policies to mainstream gender perspectives into the military having adopted the United Nations Security Council Resolution 1325 which calls on all member states to ensure that women and societal security needs are safeguarded through increased emphasis on prevention, protection and participation in military operations.

“Currently, the Armed Forces of Nigeria has attained 27.7 percent female participation in peacekeeping operations. This is higher than the UN recommendation of 17 percent.”

While noting that the Nigeria Defence Academy (NDA) has commenced training of female cadets as combatant officers, the CDS, said: “These women are given equal opportunities like their male counterparts including commanding major combat units and flying fighter jets for the NAF. The Nigerian Navy has also deployed women as sailors and for other key aspects such as ship maintenance,” he said

Also speaking, Defence Minister, Major Gen Bashir Salihu, who was represented by the Deputy Director, Education, Mrs Ene Ujah, promised to project the needed cordial relationship between the ministry and the military to promote peace and security of the country.

The minister described the conference as apt and timely, given the strategic significance of women military in the operational efficiency of the armed forces.