I killed 20 persons in several attacks in northeast, says…

It is only a foolish people that experience fuel scarcity… 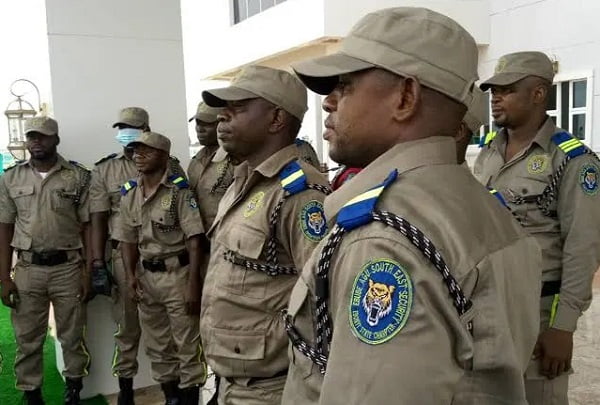 In order to support sanity in any society, adequate security for lives and property must be effectively implemented. This does not exclude the Old Eastern Region of Nigeria (Biafraland).

However, the Formation of Ebubeagu, which purports to be a Security Organization, can merely be described as the Devil’s advocacy. Despite abundant evidence indicating that the activities of this state-sponsored militia (Ebubeagu) indicate the exact opposite, these men who were entrusted with protecting citizens’ lives and property set up this vicious group and claim that it serves its purpose.

Ebubeagu was founded by governor Dave Umahi, who also served as chairman of the South East governors Forum of Nigeria. Its purpose was to oppose the Eastern Security Network (ESN), which was founded by IPOB leader Nnamdi Kanu. In addition, despite Kanu’s directive for his ESN to curb Fulani terrorism in the Biafran region, Ebubeagu agents are charged against the ESN and instructed to randomly kidnap and kill Igbo youths, alleging that they are members of the ESN and IPOB. In point of fact, it is undeniable that the majority of members of this militia force are not Igbo.

Within the brief amount of time that they have been in operation, Ebubeagu have unleashed severe terror on the Biafran populace. The atrocities Hope Uzodimma, the man who occupies the state administrative building, used this Ebubeagu millitia to inflict on the residents and citizens of Imo state will not be forgotten quickly. They cannot forget the murders of innocent people committed without a court order; mainly young people in their prime. They will never be able to forget the unprovoked burning of homes and other properties for the sole purpose of creating fear and asserting dominance. They can only be compared to the infamous “Awkuzu Special Anti-Rubbery Squad(SARS),” a special unit of the Nigerian Police that is said to be trained and funded by the British government. Their legacy for extrajudicially killing innocent people and harvesting their internal organs to sell to foreign bidders is also outstanding. The brutality of these Ebubeagu agents is unparalleled.

These cold-hearted, unprofessional operatives are not just a problem in Imo State; they are also all over Nigeria’s southeast and even the coast, where they are said to have been recruiting untrained, misguided, and unemployed youths to join the killing squad so that they can carry on their horrifying campaign against their relatives in the eastern hinterland. As it serves the fulani oligarchs’ own ethnic agenda, it has been demonstrated that this program is supported, sponsored, and managed by the federal government.

“The Serpent will never give birth to anything short in length,” is a popular Igbo proverb.

The Fulanis, to whom the British entrusted the affairs of their company (Nigeria), had also been taught the deceitful and cunning tactics that the British used on their colonies during colonialism to control the rest of the sheeps when she wasn’t there, which included recruiting a few people who were willing to serve their interests, giving them power, and using them to exploit the majority for their own benefit. Additionally, the Fulanis have utilized the same strategies on numerous ethnic groups in Nigeria, particularly in the former Eastern region (Biafra), and they have so far been successful.

People in Imo State voted for their preferred candidate in Nigeria’s midterm elections in 2019, but it appeared that their candidate was not in the interest of the federal government. As a result, the government nullified the results, went to the supreme court, and in a “sham” decision overruled the accurate electoral results and installed the fourth-place candidate as the winner of the contest.

And in all of these instances, officials from Britain and Europe who were present to observe and ensure a free, fair, and open election did nothing to warn those manipulating the results. They tried to protest the injustice, but their fate was already sealed, and that was the end of it. The mandates of the people were stolen.

IPOB and Mazi Nnamdi Kanu, her leader, were yelling at the top of their lungs that the act was a travesty of justice and that a state-sponsored criminal act could never be beneficial. Nnamdi Kanu also said that Hope Uzodimma was coming to Imo State government house to advance the agenda of those who defied all rules to put him there. The script that he was given began to play out quickly: State-sponsored criminals and militia, led by Ebubeagu and the Nigerian army, turned a once-peaceful state into a war zone, displacing thousands of people from their ancestral homes.

Family Writer Press International has taken it upon themselves to thoroughly investigate the entirety of the “Ebubeagu Program” in order to identify the source of the criminal gangs that have proliferated the region, their sponsors, and their motives. This is due to the fact that the Nigerian media has provided very little and biased coverage of the atrocities committed against the innocent citizens of the entire old Eastern region by these Ebubeagu militia and other state-affiliated political gangs.

During our investigations, we discovered and confirmed the IPOB claim that the Nigerian government and politicians had recruited youths from the coast to join the Ebubeagu militia to terrorize the hinterland. We learned that one of them is Mr. Abe, who cleans the environment and disposes of waste in the Swale market in the state of Bayelsa. According to our correspondent, on December 28, 2022, market women in Swale were huddled in circles, shaking their heads in dismay and agony. A woman who requested anonymity told our correspondence that “Mr. Abe was really loved by many market women because of his generous and gentle lifestyle, as he discharges his duty to the society” while we were interviewing a few of them to learn the reason for their unhappy faces. However, it surprised us to learn that Abe was one of those recruited and sent to Imo state to join the Ebubeagu militia last month. Abe also returned at the middle of December in pristine condition. The woman expressed her disappointment, “We all were happy to welcome him, but we received the most shocking news today that Abe was killed while returning to Imo state to resume his newly found job.”

In addition, we came to the realization that Abe was not the only one to suffer as a result of this tragic incident; numerous other families are even searching for their siblings and other relatives, unaware that they were killed while they were on criminal assignments. Or, they got into a fight with other gangs with political affiliations or even Nigerian security personnel.

Because of this, the continued existence of Ebubeagu is not only disastrous but also harmful to the people who live in Nigeria’s entire old Eastern region. Hope Uzodimma and the governors of the south east urgently need to stop using this killing squad to devastate the region, assassinate political rivals, and then turn around and claim that innocent people are to blame.

The people of Biafra should be regarded as human beings and not as farm animals that will be slaughtered without raising any eyebrows. Amnesty International and Human Rights Watch, as well as Hope Uzodimma and his companions for the devastation of the lives and property of the people of Eastern Nigeria (Biafra), should join their voices in investigating and criticizing these state-sponsored terror millitias’ gross violations of human rights.