BREAKING: Unrest In Aso-Rock As Abba Kyari Falls Out With…

“We’ll never forgive those that killed our brothers”, Kanu says as IPOB observes a minute silence 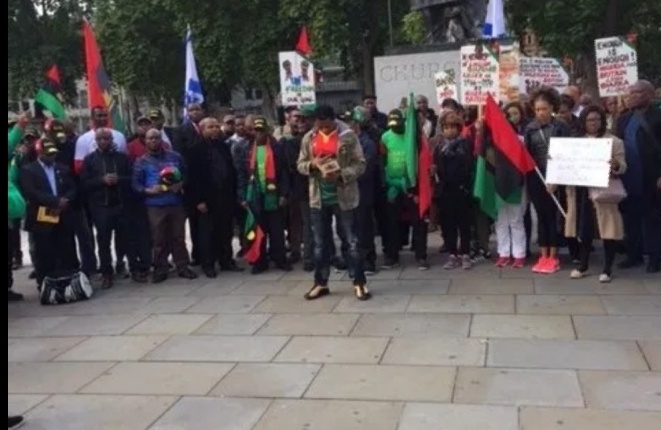 SAHARANEWS – The Proscribed Indigenous People of Biafra, IPOB, Saturday observed a minute silence in honor of their members who died in their quest for a sovereign state.

The leader of the group Mazi Nnamdi Kanu, who announced the date through his twitter handle, vowed never to forget nor forgive those that killed his members at his residence in Afara-Ukwu, Abia state.

He said that September 14 is #SaboteurDay, noting that he prayed and observed a minute silence at exact 12: noon for Gallant 28 Biafrans that died two years ago in his house.

His words, “At exactly 12 Noon Biafraland Time I honoured them with a minute silence followed by a prayer at 12:02. The #Gallant28 and all that fell on this day two years ago are immortal, they will never be forgotten.”

It was reported that about 28 members of IPOB lost their lives. Kanu however accused Army of invading and killing his members at his residence.

In a rebuttal, the Nigerian Army distanced self from the allegation, noting that such never happened.

“There was no surrounding of Nnamdi Kanu’s residence. It is not true,” said army spokesman Sani Usman.

Kanu had also accused the South-East governors of colluding with the federal government and having a full complicity in the activities of Army’s Operation Python Dance in the geopolitical zone.

In collection, Kanu and his group observed a minute silence for those that died two years ago.

September 14 is #SaboteurDay
We shall observe a minute silence at 12 noon Biafraland time to remember the #Gallant28 that fell at my residence in Afara-Ukwu and all Biafrans that were murdered through Operation Python Dance II. We will never forget nor forgive.2,30910:21 PM – Sep 13, 2019Twitter Ads info and privacy1,486 people are talking about this

At exactly 12 Noon Biafraland Time I honoured them with a minute silence followed by a prayer at 12:02. The #Gallant28 and all that fell on this day two years ago are immortal, they will never be forgotten.

(VIDEO) XENOPHOBIA: South Africa Protest For Peace, Begs Nigerians And Other Foreigners Not To Leave – All Thanks To Air-Peace