Jewish Rabbis Storm Nig Court Over The Arrest Of IPOB… 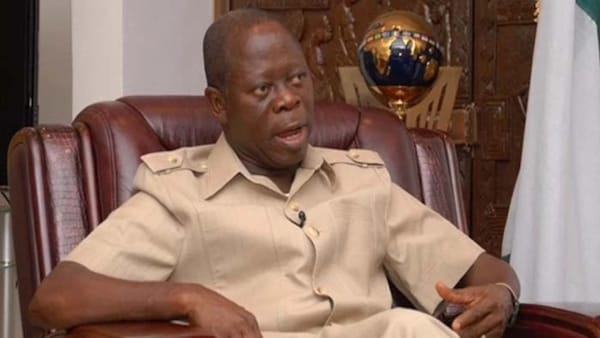 The embattled national chairman of the ruling All Progressives Congress (APC), Comrade Adams Oshiomhole, is expected to resume questioning at the Department of State Services (DSS) anytime he returns to the country.
Punch reports that this was disclosed by security sources on Thursday, November 8. The newspaper also said President Muhammadu Buhari was aware of the investigation of the national chairman of his party by the DSS.
Report claims that the director general of the agency, Yusufi Bichi, informed the president about the desire of the DSS to question Oshiomhole over allegations levelled against the latter by some aggrieved APC members.
According to sources, President Buhari asked the DSS to go ahead with the questioning after being told about the allegations against the party chairman.

A source said: “The comrade (Oshiomhole) is expected to return for further interrogation when he returns to the country. That’s why we released him on administrative bail.
“We are still looking at his statements and also carrying out further investigations. This type of operation is not meant for the members of the public.
“Rather, we will brief the president when the report is ready. Oshiomhole is the national chairman of the president’s political party. He deserves to know our report first.”

Comrade Adams Oshiomhole, the national chairman of the All Progressives Congress (APC), left the country early on Wednesday, November 8, in the midst of the commotion caused by his interrogation by the Department of State Services (DSS) on Sunday, November 4 and Monday, November 5.
Governor Yahaya Bello of Kogi state secured bail for Oshiomhole from DSS after he underwent nine hours of interrogation on Sunday and for several hours again on Monday, November 5.
Oshiomhole’s interrogation was prompted by numerous petitions sent to DSS, Economic and Financial Crimes Commission (EFCC) and the presidency arising from APC’s primary elections, which led to bitter acrimony in several states with allegations of bribery and manipulation.
ALSO READ:  BREAKING:UN chief calls for making 2021 “year of healing”.