2023: Old Tinubu told to contest for senate, forget plan to… 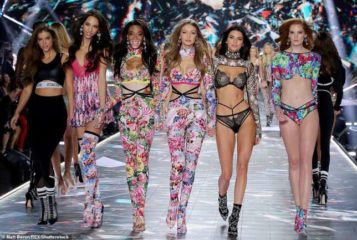 The Victoria’s Secret show held last night in New York and it was spectacular.A troupe of famous models including our very own Mayowa Nicholas strutted their stuff down arguably the most famous runway on the planet. Take a look!

The angels flew back in town for the Victoria’s Secret Fashion Show after spending two years around the world; namely Paris and Shanghai.

The show is a lavish event with elaborate costumed lingerie, varying music by leading entertainers, and set design depending on the theme of the year. The show attracts a plethora of celebrities and entertainers, with special performers and acts every year.

Every year, the Victoria’s Secret show brings its famous bejewelled Angels together for what is consistently a glittery catwalk extravaganza. It’s the most-watched fashion event of the year with over 800 million people tuning in every single year.

Often less is more when it comes to the VS show, with models typically showcasing little more than lingerie, heels and a pair of wings. There are always ‘themes’, like ‘sexy sportswear’ or ‘sexy nightwear’ or ‘sexy pixies’ with the lingerie taking centre stage.

Last year, brand collaborated with Balmain on some one-off looks for the show, marking the first time that VS had teamed up with a high-fashion brand to produce pieces that will actually be made for retail. This year, the company collaborated with Mary Katrantzou.

Speaking about the collab, Mary said, “Everything that Victoria’s Secret creates is about a woman feeling confident and empowered, and also having fun with what she is wearing. This collaboration is going to be bold, fun and playful.”

This year, the Fantasy Bra will be designed by Altelier Swarovski and modelled by Elsa Hosk. The Swedish model was made an official Angel in 2015 and has walked in the show since 2011. The bejewelled bra is adorned with more than 2,100 Swarovski diamonds and has been valued at $1 million. It took over 930 hours to create and has over 71 carats.

For the first time ever, customers will be able to purchase a version of the fantasy bra (made with real Swarovski crystals). It will cost $250 and will go on sale later on in November.

The calm before the storm

The Victoria’s Secret Show is one of the most anticipated shows in the world and every girl knows that half the fun is getting ready. Backstage at th VS show is absolute chaos with angels getting ready for the big show and press running around trying to get pictures and exclusives.

Angels including Jasmine Tookes and Stella Maxwell courted the media and frolicked with their fellow angels as they prepared for the biggest night of their lives.