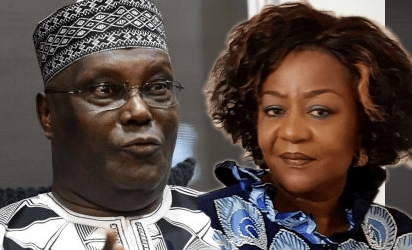 SAHARANEWS – Former Vice President and candidate of the Peoples Democratic Party (PDP) in the last presidential election, Atiku Abubakar has faulted claim that he is on the watch list of security agents in the United Arab Emirates (UAE).

Atiku, in a letter by his lawyer, Mike Ozekhome (SAN), attributed the claim to the Special Assistant to the President on Social Media, Lauretta Onochie.

Atiku argued that the said claim was not only false, but it has also negatively impacted on his reputation both within and outside the country.

He demanded a retraction of the claim, payment of N500millionin damages, failing which he threatened to sue and demand N2billion.

Part of the letter dated May 14, 2019, which as made public on Sunday, reads: “Our client categorically denies each and every allegation contained in the said publication which is a figment of your imagination.

“Our client states most emphatically that the entire opprobrious and denigrating story above referred to is most misleading, baseless, false, malicious and totally bereft of any foundation howsoever.
“We hereby state must emphatically that the inference and grave conclusions made by you in the obviously politically orchestrated story were invented by you and others of your ilk solely to cause maximum damage to the high reputation of our client, who is currently before the Election Petition Tribunal against your employer and boss, President Muhammadu Buhari, challenging the latter’s purported victory in the last presidential election

“Contrary to your derogatory, disparaging, mendacious and unrestrained defamatory statement, as published in various print, electronic and online media platforms, of and concerning our client, our client is not and has never been on the watch list of the UAE, or any other country, for that matter.

“He has neither ever been denied entry into, interrogated, nor been declared wanted by the UAE Authorities, or any of its security agencies.

“It is quite revealing that even as we write this letter, our client is present in the UAE and has not been accosted by any security agencies over the said frivolous and baseless allegations.

“To say our client is shopping for terrorists is not only dishonest and reckless, but is calculated and

“Your odious publication is clearly also aimed at rubbishing our client’s image and reputation.

“It has caused him national and international backlash and embarrassment and done incalculable damage to him.

“Your publication has also caused our client, in the eyes of reasonable members of the public, unspeakable odium, obloquy, hatred, ridicule and psychological trauma.

“He has thereby been subjected to the shame and infamy of being viewed by members of the public as not only corrupt, but as a terrorist and sponsor of terrorism.

“Numerous telephone calls, emails, visits, letters and private social media chats by his family members, friends, political and business associates, and international statesmen and women in the last few days attest to the alarm and serious concerns generated by your false publication.”

JUST IN: Don’t Let Your Disappointment With Buhari Turn You Into A Bigot – Lamido Cautions Obasanjo

BREAKING: I Brought APC To Limelight In The South East But Now, Am Treated Like An Outcast – Gov Okorocha Laments