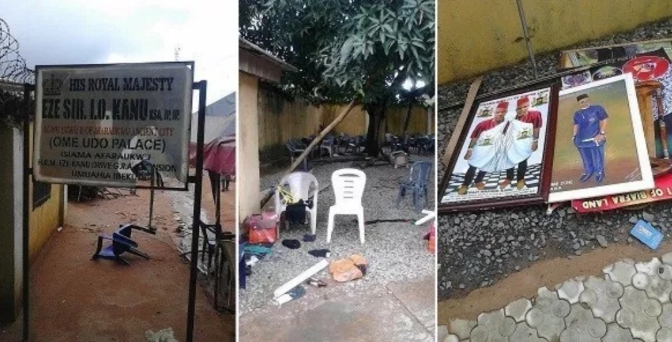 SAHARANEWS – A Non Governmental Organisation, Alliances for Africa, has visited the Afaraukwu Umuahia country home of the leader of the Indigenous Peoples of Biafra, Nnamdi Kanu, to investigate alleged invasion by the Nigerian military.

Addressing newsmen after they were conducted round the home, the leader of the team, Ms Chidire Anonye, said they were in the compound to collect raw data from the compound for analysis.

She said, “We are documenting a project on mass atrocities by state actors in Abia; other members of the team had gone to other states in the zone for similar task.

“We are investigating killings of IPOB members in Anambra, invasion of communities by herdsmen in Enugu, military barricades in Imo and communal clashes in Ebonyi.”

She added that after objective analysis of their findings by their team of experts, the group might consider legal option to seek redress.

“We have the capacity to take government to a regional court, ECOWAS court, to demand justice if found liable,” she said.

When asked of the measures being considered by the rights group to punish perpetrators of crimes, she deferred comments till the end of investigations.

Also in the delegation was the Executive Director, Moral Integrity Network, Innocent Akomas.

Receiving the team on behalf of his family, Kanu’s younger brother, Emmanuel, expressed joy over the visit which he said would further draw international attention to atrocities by security operatives against unarmed Biafra agitators.

He said that contrary to fears in some circles, Biafra Republic would be “restored without any war.”

Emmanuel said his elder brother had been engaging in diplomatic talks with notable world leaders and governments on how to peacefully restore Biafra.

ALSO READ:  Biafra: There will be serious trouble if Nnamdi Kanu dies in Custody — Mbaka

According to him, important world leaders are now lending their full support to the struggles.

“The current diplomatic efforts by my brother on Biafra restoration are yielding positive efforts,” he said.