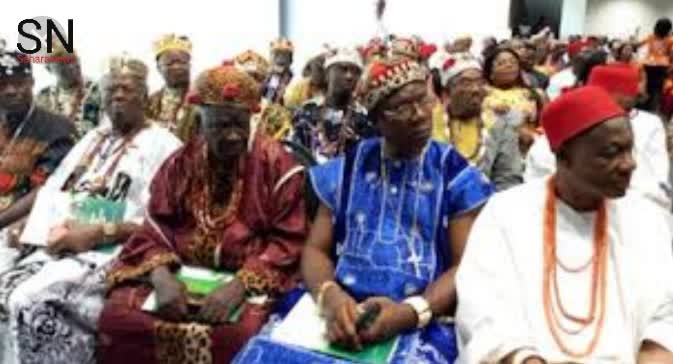 SAHARANEWS – The Southern and Middle Belt Leaders Forum yesterday cautioned the Federal Government not to proceed with its plan to set up a radio station for Fulani herdsmen, saying the move would precipitate a crisis in the country.

It warned that the station would become a weapon for spreading hateful propaganda against other nationalities.

It regretted that the development was unfolding at a time the Federal Government has been allegedly acting as the information wing of Boko Haram and herdsmen.

The forum’s reprimand came on the heels of accusations by some prominent Nigerians that the government was executing a ‘Fulanisation’ agenda, a claim the President Muhammadu Buhari administration has dismissed.

“The radio smacks of hypocrisy and deception, coming from a government that has in the last four years denied responsibility on behalf of Fulani herdsmen for crimes they (herdsmen) even owned up to.”

It noted that Section 55 of the 1999 Constitution recognises English, Yoruba, Hausa and Igbo as languages in which official business could be conducted but leaves out Fulfulde, which according to the forum, most northerners don’t even understand.

It insisted that the radio station would be used to spread hate against other ethnic nationalities; given the poor way the government has handled the killings of thousands of citizens. It added that the plan would destroy the nation’s fragile cohesion and affirm views that the Buhari administration is a Fulani government.

Minister of Education Adamu Adamu confirmed the acquisition of the station’s licence in Abuja on Tuesday. He said the radio service would operate on 720KHz frequency and would strictly use the Fulani dialect. He further disclosed that plans were underway to get funds for the procurement and installation of equipment.

The executive secretary, National Commission for Nomadic Education (NCNE), Prof. Bashir Usman, explained that some veteran Hausa broadcasters have already been contacted to develop programmes for the station.

The presidential candidate of the Peoples Democratic Party (PDP) and former Vice President Atiku Abubakar meanwhile has alleged that “unscrupulous and anti-democratic elements” were plotting to “contrive skirmishes in the coming weeks” with a view to implicating him.

“We wish to blow the whistle as an early warning alert of the grandiose scheme aimed at jeopardising the reputation of His Excellency Atiku Abubakar in the coming days and weeks. By the merit of what is beginning to unfold, there are plans to create some upset across the country whereby alleged perpetrators of such crimes will engage in phantom name dropping of Atiku Abubakar and some senior personalities in the PDP,” says a statement by Paul Ibe, spokesman for the former vice president.

It reads: “Already, we are abreast of some other plans to plant fictitious stories in some mushroom media outlets aimed at discrediting Atiku and his political party, the PDP. It therefore becomes preponderant that we alert the public to this demonic plan and to say that it will be imprudent to compromise the peace and security of Nigerians in order to score a cheap political goal.

“Towards this end, and for the umpteenth time, we call on the Federal Government to be awake to its responsibilities of providing security and ensuring peace, and to desist from actions and utterances that are capable of exposing our fault lines.”

The statement adds: “It is very unsettling that senior administration officials, especially those who are the mouthpiece of government, will make reckless but calculated comments to tarnish the image of Atiku Abubakar and government will sit idly on them.

“With the conclusion reached by relevant security outfits that there is no evidential proof to back the claim by Lai Mohammed that the opposition was planning to upstage the government, we demand that the information minister should be arrested for a breach of security and an apology rendered to Atiku Abubakar and the PDP.”

BREAKING: 5 Escape Death As Another Building Collapsed In Onitsha