BREAKING: IPOB Cries Out Over The Continued Illegal Arrest And Detention Of Her Members In Aba By Nigerian Army, Put International Communities On Notice 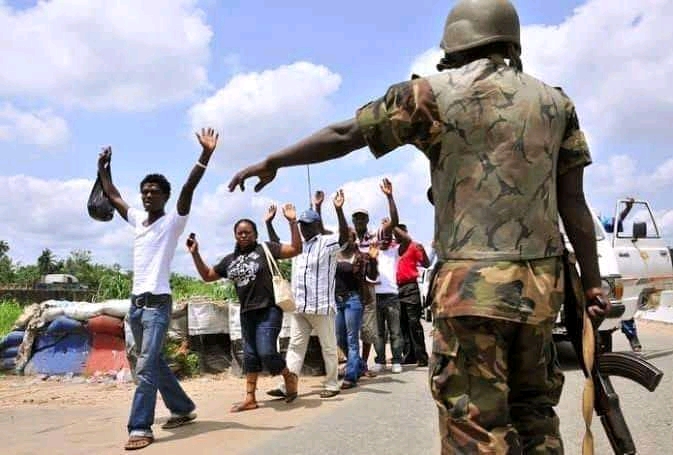 SAHARANEWS – We the global family of the Indigenous people of Biafra (IPOB) condemn the incessant and illegal arrest of innocent people in Aba Abia State since Saturday 27th July, 2019 by Nigeria soldiers. If the ruling terror sponsoring Fulani cabal in Aso Rock headed by Abba Kyari thinks Nigerian Army can succeed in clearing the path for Miyetti Allah to conquer our land for their Fulani migrants from across the Sahel, then they are mistaken.

We are asking the United States ambassador to Nigeria, his British counterpart, EU representative and African Union to note the level of lawlessness being unleashed on peace loving Biafrans by men of the Nigeria Army. A combined force of the Nigerian Army, Police and other security outfits have started providing logistical, intelligence and ground offensive support for the advancing murderous Fulani herdsmen. Nigerian Army formations in Biafraland have become in effect the advance guard of the invading Fulani terrorists. People are being kidnapped, summarily executed and detained without trial as a way of weakening our resolve in our avowed resistance against Aso Rock sponsored Islamisation agenda in the south.

We know the US mission to Nigeria, British High Commission and the rest will pretend they don’t know what is happening but we encourage them to send a fact finding mission to Aba as a matter of urgency to gain a first hand knowledge of the silent genocide being committed by the Nigerian Army against innocent civilian Biafran populations.

If the United States embassy and British High Commission in Nigeria is part of this devilish Fulani ploy to destroy and conquer Biafraland they should let the world know rather than looking the other way as the brutal massacre of civilians continue unabated across Biafraland.

The unconstitutional and illegal arrest of Biafran citizens in Aba since last Saturday must stop. This same Nigerian Army that has failed woedully to fight Boko Haram or curb the activities of their fellow Fulani terror herdsmen are in Aba arresting people at Ehi Road by Kent, close to the shopping centre. There they have been abducting dozens of innocent citizens and taking them to unknown locations. None of their victims has ever returned alive. Nigerian soldiers are in Aba terrorising the residents for the benefit of their Fulanisation agenda. There is no war going on anywhere in Biafraland but every kilometer is Fulani army checkpoint. Civilised nations of the world must prevail upon the Abba Kyari led government of Nigeria and her Nigerian Army to disclose the whereabouts of those they abducted and where their dead bodies are.

The Nigerian Army arrested more than 50 people at a place known as Abia State Amalgamated Tricycle Operators Association (ASATOA) office in Aba along Kent Street. They equally arrested 25 people at Afor-Une in Umungasi and St Michael’s Road Aba near NUJ office. It was a wicked sight according to the passers-by and eyewitnesses. The Fulani Islamic solders who were on this mission boasted and shouted that they will soon start arresting ladies and mothers that wear mini skirt or any form of short dress in Aba. They are in effect enforcing Islamic Sharia law in 100% Judeo-Christian Aba. Is it now the duty of an army to enforce the dress code of women in a supposed secular democracy?

We wish to place the United States Ambassador to Nigeria on notice that mass arrests and cold blooded execution of Biafrans going on in Aba is unacceptable. We duly expect him to notify the State Department in Washington about this ugly development. We know the British High Commission in Nigeria will always support any Fulani murderous expansionism against Biafrans but it will be prudent for the diplomatic community to unserstand that we will not allow this Nigerian Army of occupation to get continue to get away with murder. When we start the defence of our land nobody should blame us.

Mainstream media in Nigeria should equally note what the Nigerian Army is doing in Aba for future reference because we shall resist this silent genocide in our land with all our might and when we do, they should always remember the Nigerian Army first started it.

With all these going on in Aba, we call on men and women of goodwill across the world to prevail upon the Nigerian government of Fulani in Aso Rock and their Nigerian Army to release the dead bodies of those they arrested and executed on Saturday in Aba without further delay because they committed no crime.