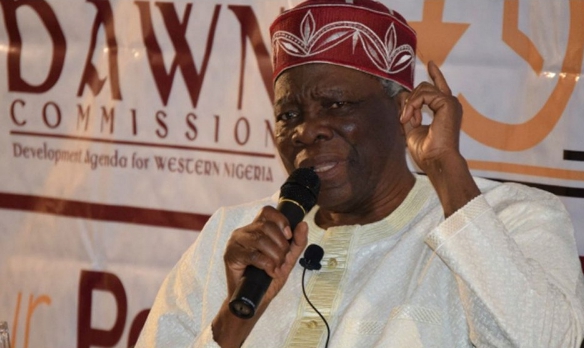 SAHARANEWS – The newly-appointed leader of the Yoruba ethnic race, Professor Banji Akintoye, on Saturday declared that Nigeria will some day break up if the current situation of injustice and favouritism failed to be addressed.

Akintoye, who likened Nigerian nation as a country under the reign of an empire, said that the empire must crumble and break up.

Akintoye said like other artificially created empires across the globe that have become history, Nigeria is a time bomb, which may soon explode unless equity, justice and fair play reign supreme in the land.

“Some foreign powers came and created an empire and gathered a number of nationalities together and gave them a single government. Nigeria is an empire comprising many nationalities. In the history of the world, every empire breaks up and the nationalities remain.

“Historians think that the reason for this is that swallowing nationalities together in the belly of one empire is too much. The empire will suffer indigestion and finally break up. That is a fundamental thing.

“It is not about Nigeria alone. It is a fundamental universal world experience that empires combine many nationalities and rule over them and then the empire breaks up. So, it is to be expected that a country like Nigeria will some day break up.”

Akintoye, who has taught History in universities in Nigeria and the United States and got elected a Senator in the Second Republic, however, gave conditions that could forestall the dismemberment of the country.

“From modern perspective of governance and interrelationships, we can do things that can make Nigeria survive for a long time. Number one, we must get the people who believe that they have the right to conquer and subdue the rest of Nigeria.

“We must ask them to give up, repudiate and stop all of that disaster. They must return to civil relationship among other people of Nigeria. If they continue to act like they own the country, they will only speed up the breaking up of the country. They say Nigeria is theirs, that Allah has given it to them.

“There is no way Nigeria can continue as long as this type of agenda and ambition exists among us. The first thing is to demand of our Fulani brethren that they must repudiate the agenda.”

He described the Yoruba as a “powerful ethnic group” not just in Nigeria but also in the world, disclosing that the Yoruba have the reputation of being the most educated immigrants in the United States.

“Very soon, we will be able to hold a world congress of the Yoruba people and the whole world will see that this is different. Some intellectuals are even now telling us that the Yoruba nation and its descendants in the world are in almost every country in the world. Yoruba are usually among the most educated anywhere you find them outside the country.”