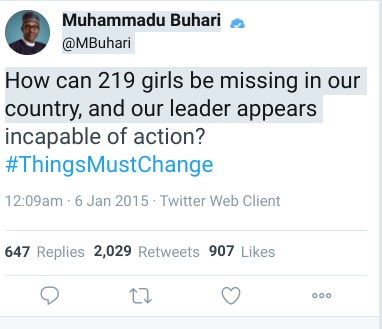 Buhari defeated Jonathan in 2015 to end the 16-year rule of the People’s Democratic Party since 1999.

Under Jonathan, about 300 girls were kidnapped from Government Girls Secondary School, on April 15, 2014, in Chibok town, Borno State.

Buhari, who was seeking Nigerians’ support, had capitalised on the issue, slamming the Jonathan-led government over the girls’ abduction.

In the tweet, Buhari had condemned the Jonathan-led government’s perceived ineptitude to take drastic measures towards securing the release of some abducted school students.

“How Can 219 Girls Be Missing In Our Country, And Our Leader Appears Incapable Of Action? #ThingsMustChange,” he had tweeted.

He was also quoted as saying his approach to the crisis “must begin with honesty as to whether the Chibok girls can be rescued.

“Currently, their whereabouts remain unknown. We do not know the state of their health or welfare, or whether they are even still together or alive,” he added.

He had also used social media to continually call on former President Goodluck Jonathan to be decisive about the children’s rescue, making it a major campaign promise when he becomes the President.

His tweet has sparked controversy, with many calling out his administration over the recent abduction of school children in Katsina, Niger and Zamfara states and growing insecurity in the country. 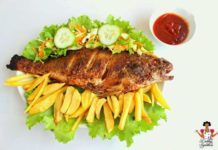 How to easily grill fish in your microwave 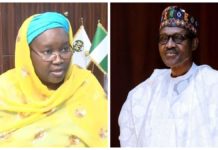 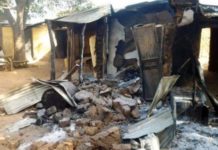