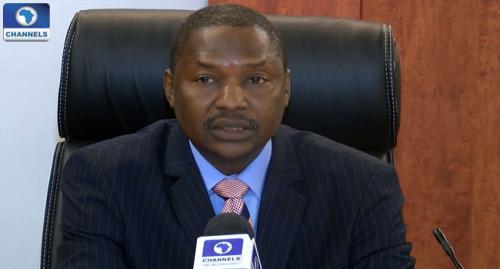 The Attorney General of the Federation and Minister of Justice, Mr Abubakar Malami, has distanced himself from the continued detention of the immediate-past National Security Adviser, Sambo Dasuki, by the Department of State Services.

The AGF denied culpability in Dasuki’s continued detention in his response to a suit filed by an Abuja-based lawyer, Mr Johnmary Jideobi.

Jideobi, in his suit filed before the Federal High Court in Abuja and marked FHC/ABJ/CS/807/2018, sought, among others, an order stripping Malami of his SAN rank on the grounds of engaging in unprofessional conduct by allegedly advising the Federal Government not to obey the various court orders directing that the ex-NSA be released from illegal detention.

The plaintiff also cited an interview granted earlier in the year by Malami, stating that Dasuki would not be released from custody in the interest of national security.

The said interview formed the basis for the petition lodged before the Legal Practitioners’ Disciplinary Committee by the Dasuki family, requesting that Malami be stripped of his SAN rank over his utterances in respect of the courts’ pronouncements ordering the ex-NSA’s release.

The family of the leader of the Islamic Movement of Nigeria, also known as Shi’ites, Sheikh Ibrahim El-Zakzaky, had also filed a similar petition against the AGF before the LPDC.

Dasuki was re-arrested by the operatives of the DSS shortly after he was released on December 29, 2015 by the authorities of Kuje Prison in Abuja on fulfilling the conditions of the bail granted him by the High Court of the Federal Capital Territory in Maitama, Abuja, where he is being prosecuted on corruption charges.

The Federal High Court in Abuja where he is being prosecuted on charges of money laundering and illegal possession of fire arms had also granted him bail.

Apart from the bail granted him at different times by the trial courts, both the Federal High Court in Abuja presided over by Justice Ijeoma Ojukwu, and the ECOWAS Court of Justice had at various times in their judgments on the fundamental human rights enforcement suits filed by Dasuki, ordered his release from illegal detention.

But the AGF, in his response to the suit which blamed him for Dasuki’s continued incarceration in violation of the courts’ orders, denied ever defending the detention of the ex-NSA.

He also said that contrary to the plaintiff’s claim, he had never rendered any legal advice to the Federal Government or any of its agency concerning Dasuki’s case.

An affidavit deposed to on his behalf stated in part, “That the defendant did not, at any time, defend the alleged refusal of the Federal Government to obey six different court orders directing the release of Col. Sambo Dasuki (retd.).

“The defendant did not, at any time, render legal advice to the President or the Federal Government or any of its agencies in contravention of the 1999 Constitution, as amended, or any other law in force.”