UN, EU, others told to conduct referendum for Biafra within… 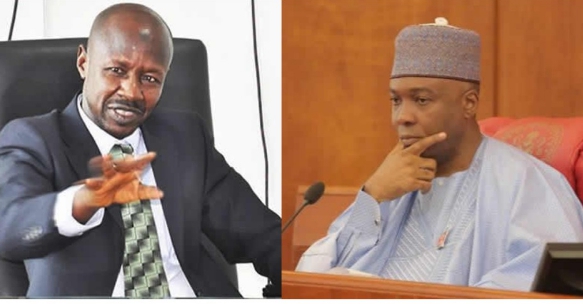 SAHARANEWS – The Economic and Financial Crimes Commission (EFCC) on Wednesday said it will not go back on its ongoing probe of the tenure of the President of the Senate, Dr. Bukola Saraki when he was the governor of Kwara State from 2003 to 2011.

The Economic and Financial Crimes Commission (EFCC) has revealed that it has a sacred mandate to rid the country of corruption no matter whose ox is gored.

The Anti-graft commission also revealed that Saraki has no cause to fret as long as he has no skeletons in his cupboard.

The EFCC, which made the clarifications in a statement in Abuja by its Acting Head of Media and Publicity, Mr. Tony Orilade, said it will conduct a legitimate forensic inquiry into Saraki’s tenure as a governor.

The anti-graft commission in a letter of April 26, 2019 wrote the Kwara State Government demanding some information on Saraki’s earnings as the state governor.

ALSO READ:  MALABU: I Do Not Have Any Account, Property Outside Nigeria - GEJ

But Saraki alleged the EFCC’s inquest was a plot to intimidate and frame him up.

The EFCC however said it is only investigating Saraki in line with its mandate.

The statement said: “The EFCC has taken note of the reactions of the Senate President, Dr. Bukola Saraki to the commission’s inquiries regarding his earnings as Kwara State governor as well as on the quality of his financial stewardship in the Senate.

“While it is his prerogative to ventilate his views on the matter as he deems fit, the commission takes great exception at the desperate attempt to cast a slur on its investigative activities by portraying Saraki as a victim of persecution.

ALSO READ:  What Nnamdi Kanu told DSS during a confrontation in courtroom

“Furthermore, the agency finds the attempt by the Senate President to tie our inquest to his International Human Rights Commission, IHRC appointment and his approaching life out of power as misleading, knowing too well that the background to our current inquiries reaches several years back.

“For the avoidance of doubt, the EFCC is obligated by law to enthrone probity and accountability in the governance space and has supremely pursued this duty without ill-will or malice against anyone.

“It is in the interest of the public and for Saraki’s personal good, that he is not only above board, but be seen at all times to be so.”

The EFCC said its probe of Saraki was always guided by the overriding public interest.

It asked Saraki not to fret if he has nothing to hide.

It added: “Indeed, all the instances in which the EFCC have had cause to sleuth into his financial activities either as a former governor or President of the Senate were driven by overarching public interest and due process of the law.

“Against the background of the possession of indicting petitions and other evidence available to the EFCC, even Saraki will agree with the commission that putting him through a legitimate forensic inquiry is the legitimate route to establish his integrity as a public servant.

“The distinguished Senate President has no need to fret so long as he has no skeletons in his cupboard.

“The Commission has a sacred mandate to rid the country of corruption and corrupt elements and restates its unflinching resolve to achieve these, no matter whose ox is gored.”