BREAKING:El-Zakzaky @70: One dead, many injured as Shi’ites,…

BREAKING: Stop Calling For Restructuring, It Will Never Work… 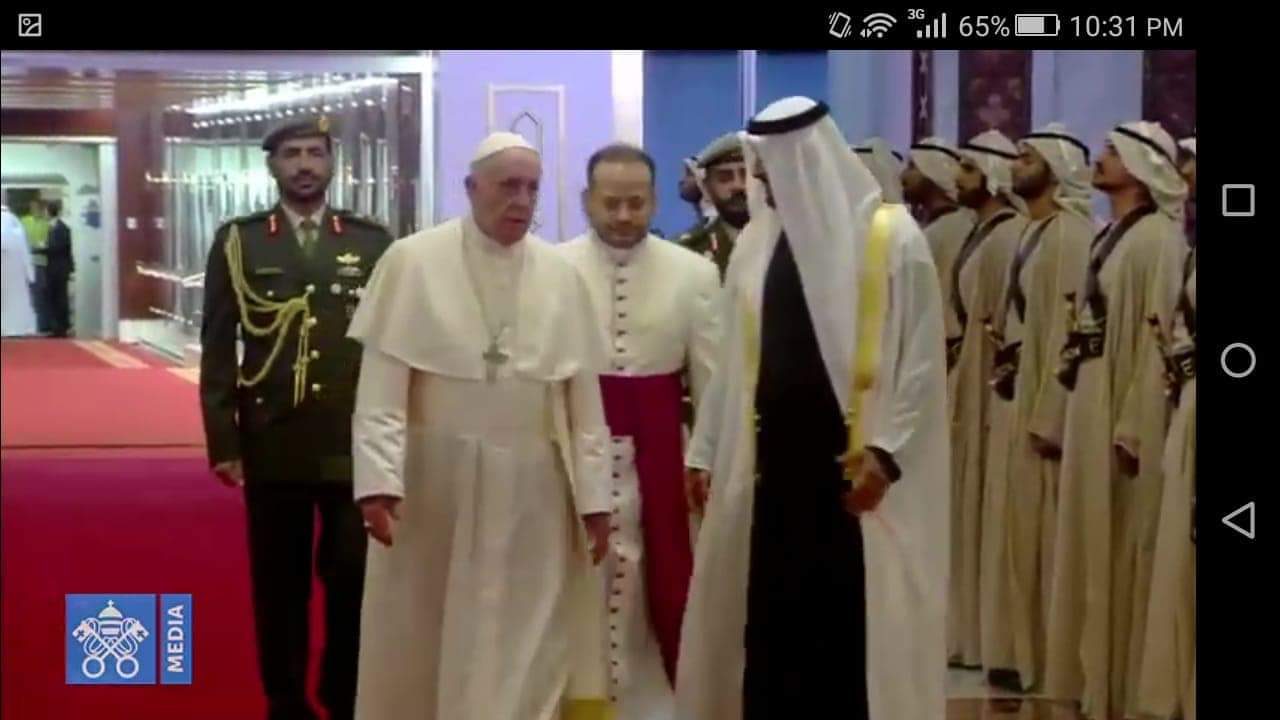 ABU DHABI • Pope Francis has became the first pontiff to set foot on the Arabian Peninsula, just hours after issuing his strongest condemnation yet of the war in Yemen, where his host the United Arab Emirates has a leading military role.

Shortly before departing for Abu Dhabi, Pope Francis said he was following the humanitarian crisis in Yemen with great concern, using his regular Sunday address in Vatican City to urge all sides to implement a fragile peace deal and deliver aid to millions of people.

“The cry of these children and their parents rises up to God,” he told tens of thousands of people in St Peter’s Square before boarding his flight for the UAE.

The UAE welcomed the Pope’s message on Yemen and believes the peace deal he referred to was a historic breakthrough, Minister of State for Foreign Affairs Anwar Gargash wrote on Twitter.

“Let us assure its implementation and make 2019 the year of peace in Yemen,” he said after the pope landed in Abu Dhabi.

Yemen’s warring parties agreed on a ceasefire in December at the first major peace talks of the nearly four-year-old war, which pits Arab states backing an exiled president against the Iran-aligned Houthi movement that controls the capital.

Tens of thousands of people have been killed in the conflict, and the United Nations says millions are on the verge of starvation. Their survival depends on the truce preventing aid from being cut off by all-out fighting for the country’s main port.

The UAE, which named 2019 its Year of Tolerance, says the (Pope’s) visit reflects its history as a “cradle of diversity”.

Pope Francis was greeted by Abu Dhabi’s Crown Prince Sheikh Mohammed bin Zayed al-Nahyan, who escorted him to meet Sheikh Ahmed al-Tayeb, the Grand Imam of Egypt’s Al-Azhar mosque and university, one of the main seats of learning of Sunni Islam. The pontiff embraced him.

Both men were to hold meetings with Pope Francis yesterday.

The UAE plays a leading role in the Saudi-led coalition battling the Houthis in Yemen. The UN is trying to implement a truce and troop withdrawal deal in the main Yemeni port of Hodeidah, agreed at the December talks as a step that could pave the way for negotiations to end the conflict.
Vatican officials have said it is not clear whether Pope Francis will address the sensitive subject in public or private during his visit to Abu Dhabi, which is aimed at promoting interfaith dialogue.

The Pope will meet Muslim leaders and celebrate an outdoor mass for some 135,000 Catholics, an event with no precedent on the Arabian Peninsula. He has said the trip, which ends today, is an opportunity to write “a new page in the history of relations between religions”.

The UAE, which named 2019 its Year of Tolerance, says the visit reflects its history as a “cradle of diversity”. The country is home to about one million expatriate Catholics, many from the Philippines. Another one million Catholics are believed to live in other countries in the Arabian Peninsula.

Priests and diplomats describe the UAE as one of the least restrictive environments in the Gulf for Christian worship. But like its Arab neighbours, the UAE does not allow dissent or criticism of its leadership.

The country faces criticism from human rights groups for jailing activists, including Ahmed Mansoor, an Emirati who is serving a 10-year sentence for criticising the government on social media.

The UAE Ambassador to Washington, Mr Yousef Al Otaiba, wrote in an op-ed in Politico magazine on Sunday that the pontiff’s visit sent a signal of coexistence and respect in the face of the “menace of extremism” across the Middle East.

JUST IN: Stop The Attacks In The Name Of Operation Python Dance On Igbo-Biafrans – Afenifere Cautions Buhari