Why the Federal Government can’t be trusted — ASUU 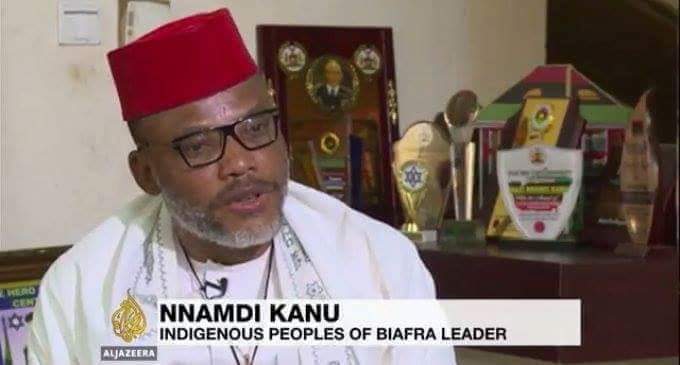 Leader of the Indigenous People of Biafra, IPOB, Mazi Nnamdi Kanu, has said the forthcoming presidential election in Nigeria will bring shame and humiliation to the country.

He said this in a New Year Message broadcast from Israel, yesterday.

He chided Nigerians for planning to vote in a presidential election where a purported ‘dead’ man is listed on the ballot paper.

The IPOB leader vowed his group will continue unabated to expose the true identity of an alleged body-double, Jubril Aminu Al Sudani, who he claims, was brought into Aso Rock to impersonate a ‘dead’ President Muhammadu Buhari even in the 2019 polls.

He said: “The unmasking of Jubril Aminu Al Sudani the fake Nigerian President will continue unabated. By the time we are done with him and his handlers, (Lord Frederick) Lugard will become truly ashamed of what he created (Nigeria).

“I would like to see Nigerians participate in elections where one of the names on the ballot paper is a dead man. This shame and humiliation is one that will never leave Nigeria as it heads ingloriously towards self destruction.”

He further took a swipe at the Federal Government for announcing a nationwide military exercise code-named: ‘Operation Python Dance’.

He said the military operation was part of a grand sinister plot to rig the purported Jubril Al-Sudani and the cronies of the cabal alleged to be controlling the Nigerian government.

Kanu warned that the military would face the wrath of the group if they kill any innocent pro-Biafran agitator in the course of the Operation Python Dance.

His words: “We understand the enemy (Federal Government) has announced yet another round of Fulani military invasion of our land in the name of Operation Python Dance, no doubt to help facilitate the rigging of elections for Jubril Al Sudani and the cronies of Fulani Cabal across Nigeria.

“What I said previously still stand and there is no going back. Chukwu Okike Abiama is my witness that any reported shooting or killing of any Biafran by this Fulani Janjaweed Army of Nigeria will be avenged. Those who previously doubted our resolve should ask Okezie Ikpeazu what he’s experiencing in Abia State.

“I am placing the colonial master Britain on notice that should the government of Theresa May give the go ahead for any innocent Biafran to be killed again on Biafran soil, Nigerian soldiers will face our wrath.

“Enough of this Fulani intimidation through the Nigerian Army. This is an army that has refused to engage ISIS in the major theaters of northern Nigeria and the wider Sahel region. They (Nigerian Army) refused to counter the killing spree of Fulani herdsmen across the Middle Belt but the same army that refused to fight Boko Haram can now easily be mobilized in the South to kill non Muslim populations with impunity.

“Police men are being deployed to face Boko Haram terrorists whereas the army that pride itself as the defender of Nigeria is running from the battle field and instead are deployed to kill civilians in order to sustain Fulani hegemonic control of Nigeria.

“Everything in Nigeria is upside down that is why I struggle to understand why there are universities in Nigeria in the first place because people go to school but end up not learning anything. Is it the job of the police to fight insurgency?

“The most astonishing thing is that people are going about their normal business pretending all is well in Nigeria when logic is being turned on its head. Can anybody identify any country in the world where the police is sent to the war front and army deployed to do police duties?

“Only in Nigeria, with her ignorant professors and pseudo intellectuals, all busy scavenging for campaign funds from politicians as impunity reigns supreme and has become the order of the day.

“None of this is surprising to us, after all Nigerians cannot differentiate between a dead Buhari and an impostor from Sudan. How can you expect them to interpret or distinguish the constitutional roles of the police and that of the army? What this APC government have succeeded in doing is to democratize ignorance, impunity and cowardice.”

JUST IN:The security situation in the State is getting worse – Gov. Shettima

BRAKING NEWS: Buhari’s Chief of Staff, Abba Kyari was intercepted, see what was found on him