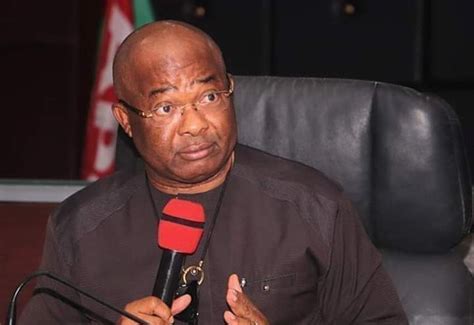 The Governor of Imo State, Hope Uzodimma, has attributed the escalating violence in the state to inmates who escaped from the Owerri Correctional Center on April 5, saying the escapees have been on rampage, further compounding the security challenges the state was facing.

Uzodimma, who made the allegation on Tuesday when he met with President Muhammadu Buhari at the Presidential Villa in Abuja, begged the federal government to provide more funds for him to tackle the security challenges.

Briefing State House correspondents after meeting with the President, the governor said his mission was to ask the “president for financial support to tackle insecurity in Imo and the South-East in general.

“Prominent among the issues is the increasing insecurity in the South-East. I know that despite the activities of the bandits and unknown gunmen, recall that the correctional facility in Owerri was broken and over 1,836 inmates were released.

“Since that time, they’ve been on rampage, committing all sorts of crimes; kidnapping, robbery and other sorts of crimes in the state and there is need for us to really clean up the state because of this period of Christmas.

“It is so important to our people and we want to ensure that those coming home to spend their Christmas will have a conducive atmosphere to enjoy their Christmas and then celebrate the season.

ALSO READ:  How I restored democracy in Imo State — Uzodinma

“Yes, we asked for support with additional manpower and also, I asked for some kind of funding to support the security situation in Imo State and Mr. President graciously approved.”

Buhari salutes Lai Mohammed, say he has enhance and brought change to Nigeria

JUST IN: Insecurity: Escaped prison resident‘re out of control in Imo, Uzodimma laments