How I lost my two legs after mosquito bite in Nigeria —… 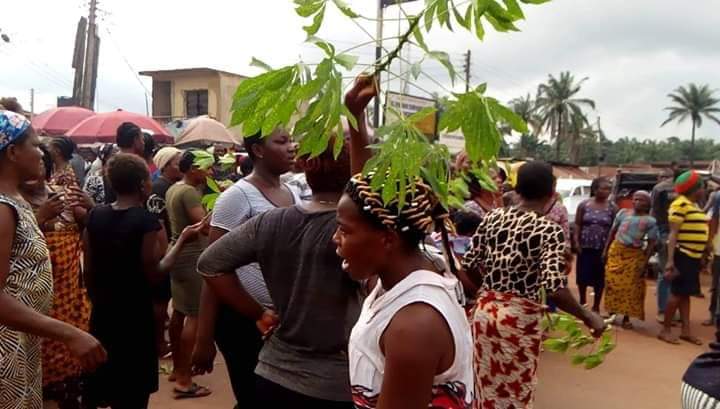 SAHARANEWS — Following the killing of a yet to be identified middle aged woman in Enugu State by suspected Fulani Herdsmen on Thursday, protesters have stormed a police station in Nchantacha, demanding the immediate sack of the Police Commissioner in the state, Mr. Suleiman Balarabe.

SaharaNews had reported that irate youths blocked the major Roads in the community, protesting the killing of the innocent woman.

Our correspondent gathered that the woman was allegedly raped by the suspected Fulani Herdsmen before she was stabbed to death.

Speaking with SaharaNews correspondent, one of the protesters said they are protesting for the immediate sack of the Enugu State Police Commissioner, Mr. Suleiman Balarabe.

According to the protester who identified himself as Monday Obumneke alleged that the Commissioner hasn’t been doing enough to curb the high level of insecurity which is currently ravaging the state.

“We are not happy about the high level of insecurity in the state. Just last two weeks, a Rev. Father was killed by the herdsmen.”

“We are demanding for the immediate sack of the Police Commissioner because he is not doing enough to curb the killings and kidnappings in the state. We are are not happy “, he added.

Another protester, Nkechi Nworie also blamed the state Commissioner of Police for the high level of insecurity in the state.

She demanded for justice over the killing of the Rev. Father murdered by the herdsmen in the state.

“All we want is Justice for those who have been killed by the herdsmen and for the killings to be put to an end. “

ALSO READ:  BURSTED: Buhari vs Atiku, The Video APC And INEC Would Do Anything To Keep Away From Presidential Election Tribunal - See Video

“We are tired of these killings. Nobody is safe again. The state commissioner of Police has failed the people of Enugu State and should be sacked,” she said.

Also speaking with our correspondent over the ugly situation, another resident of the area who identified herself as Nkechi noted that the Governor of the State, Ifeanyi Ugwuanyi joined the Vigilante Group in searching for the rampaging herdsmen.

“We are proud of our Governor, he has been doing his best to stop the killings and kidnappings in the state. “.

“Yesterday, he joined the vigilante group in searching for the herdsmen who don’t want us to sleep with our two eyes closed.”

“Although we are devastated, but we are with our dear Governor at this point in time in order to find a lasting solution to the killings and kidnappings in the state, ” she said.

The Secretary to the State Government, Prof. Simon Ortuanya, stated that the state government upon reviewing the security situation in the state, resolved to send an Anti-kidnapping Bill to the state assembly as an Executive Bill, to ensure maximum security.