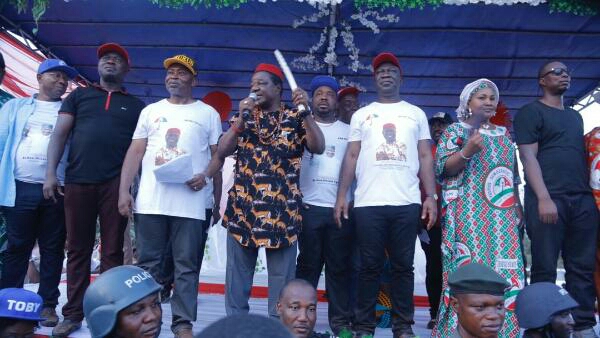 SAHARANEWS – Hon. Toby Okechukwu, the member representing Aninri/Awgu/Oji River Federal Constituency of Enugu State in the National Assembly has described his planned return to the House of Representatives as a done deal.

The two-term House member was first elected in 2011 under the platform of the Peoples Democratic Party, PDP. Under the same platform, he was re-elected in 2015 and is presently seeking to return to the House in the February 16 general elections.

Speaking during a grand rally at his Ugbo community, Okechukwu said the PDP government in the State and the members of the National Assembly had continued to endear themselves on the heart of the people through visible achievements and quality representation.

He said as such, the party would repeat its feat in the State in 2019.

ALSO READ:  Nigeria, Now One Of The Most Dangerous Places To Live, UN Expresses Concerns Over Killings In The Country

The Deputy Senate President, Senator Ekweremadu, who was also at the event, had said in his speech, that the PDP has used Ugbo community as a template, to test how to transform a rural community, into an urban center.

He added that Ugbo now had good access road, electricity, solar street lights, which has enhanced security and improved night life in the community.

He noted that these things were products of PDP government and urged every voter to vote PDP again at all levels, to ensure the continuation of those dividends of democracy.

On his part, Okechukwu had noted that the PDP “is certain of victory because it has since endeared itself into the minds and heart of the people.

“Our dear Governor, Ifeanyi Ugwuanyi has done so well in the State and this effort is being complemented by those of us at the National Assembly.

“So, it is a win-win situation for us in 2019. Our people are totally with us and that is why we will never stop to give back to the society.”

He said through his representation, his constituents have had a touch of governance in various ways, including scholarship for students, provision of water, roads, electricity, among others.

He said other projects to his credit include “training/economic empowerment programme, erosion control programme, agriculture and other community development initiatives.”

The lawmaker further disclosed that just recently, he commissioned completed bridge, along Ugwueme/Umuhu Road, which was undertaken as part of his constituency project According to him, “we shall continue to initiate projects that touch positively on the life of the people.

“As elected representatives of the people, our utmost desire is to make the people happy by putting in place those projects that impact directly on their lives.

“This is exactly what we have done here, and our promise is that the remaining one bridge will also be constructed and this road asphalted.”

Under him as the chairman House committee on works, he disclosed that he had sponsored 4 bills, moved 12 motions, attracted the award of road projects in Enugu and other Southeast States, passage of the Road FUnd Bill for Federal Roads, Amendment of the Surveyor’s Council Act and Engineers Registration, among others.

JUST IN: You Contributed in making Buhari a tyrant – Ben Bruce Reacts to Ezekwesili’s Comments on Onnoghen