JUST IN: “Declare Me Winner And Leave Buhari &… 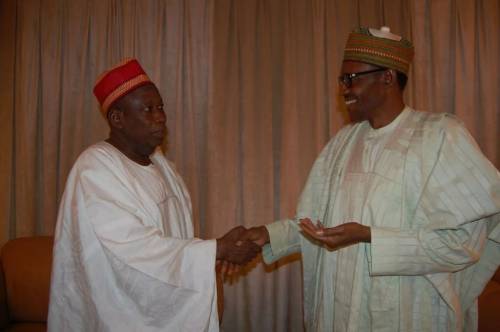 President Muhammadu Buhari has broken his silence on the videos showing Abdullahi Ganduje, Governor of Kano State, receiving kickbacks from a contractor.

The President’s statement was the response to a remark by a Kano student in France. The student was said to have lauded the achievements of the Governor, especially on scholarship.

However, according to Daily Nigerian, the President snapped, and asked the student if he had watched the videos of the governor receiving bribe in dollars.

“That aside, haven’t you watched the videos of the governor stuffing dollars under his gown?” one of the participants quoted the President as asking rhetorically, while demonstrating how the Governor was stuffing the bundles of dollars inside his outfit.

“We gave the videos to security agencies for vetting. And we will surely take action on the matter if he is found guilty,” he stated.

However, the President’s response did not go down well with a member representing Nasarawa Constituency, Nassir Ali-Ahmed and Personal Assistant to the President on Broadcast Media, Sha’aban Sharada, who pleaded with journalists to remove the portion where the President spoke about Ganduje.

ALSO READ:  I am Not The Biological Father Of The Baby! - Popular Nollywood Actor, Chinedu Ikedieze Cries Out

The Paris town hall meeting, held at Shangrilla Hotel, was attended by Nigerians studying in various institutions in France, as well as the Nigerian community in France, APC members in France, among others.