BREAKING: Akpabio Fingered In The Deadly Attacks On INEC…

INSECURITY: Ohanaeze Fumes Over N100bn Offered To Miyetti Allah By The Federal Government 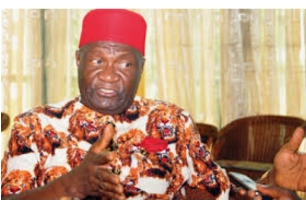 Government ministers have allegedly held meetings with Macban in Kebbi State where herdmen were offered N100 billion ($276m) to call off their ongoing murderous rampage.

Interior Minister, Abdulrahman Dambazau led the Federal Government delegation to the talks in Birnin-Kebbi, which lasted for over five hours. Apparently, Macban asked for N160 billion but after intense negotiations, both sides settled for N100 billion.

General Dambazau said: “The gathering is part of steps we have taken to tackle insecurity and clashes between herdsmen and farmers in the country. “You should not forget the fact that we have extended the meeting as a regional one.

Get Connected Without Data on Facebook
“When the sub-regional body, Economic Community of West African States, Ecowas, hosted a conference on this, these issues were discussed and part of the dialogue was to provide a national action plan on security challenges and solutions by all members of the Ecowas commission and to present it to the commission for consideration.

“That is the main reason we have come to Kebbi State to dialogue with leaders of herdsmen as part of the process.”
Ohanaeze kicks

But reacting, Ohanaeze Ndigbo, through its a spokesman, Prince Uche Achiokpaga, condemned the offer. The Ohanaeze spokesman said: “Nigerians are watching with dismay and utter disbelief, the story making the rounds of government parley with Miyetti Allah.

“More disturbing is the fact that colossal sums of money (demanded) are said to be promised to them to keep the peace. “The most devastating aspect of this development is the complete and utter lack of transparency, accountability and respect for the laws of the land.

“Who budgeted this money being doled out? What is the subhead in the budget? Who approved it? What similar arrangements were made for armless IPOB, South-South freedom fighters and murdered Middle Belters? “Have we reached a situation where we have to purchase our peace from terrorists?
What about the illegal mining going on in Zamfara, Katsina, Sokoto and other neighbouring states? “Has anyone been arrested or are we negotiating with them?

Why is EFCC looking the other way. Do you have immunity in Nigeria if you come from certain parts of the country?
“Ohanaeze is appalled at these recent developments and calls for complete transparency.”